Mr. Wong Wai Sheung, Chairman and Chief Executive of the Group said, “With the exquisite craftsmanship, quality jewellery products, as well as the heartfelt and professional services we offer, Lukfook Jewellery has been well received and supported by overseas Chinese customers. This year marks the 20th anniversary of the Group’s public listing, and we are dedicated to extend the network here in Chinatown, San Francisco and anticipate to offer unparalleled shopping experience to Chinese customers around the world and further expand the market overseas, which fulfils our corporate vision of ‘Brand of Hong Kong, Sparkling the World’ and builds Lukfook as a premier jewellery brand for all customers.”

As a reputable jewellery brand in Mainland China and Hong Kong, the Group has tapped into the North American market since 2003, and currently has over 1,500 retail shops covering nine countries and regions. Following the first Chinatown shop on Grant Avenue in San Francisco, the new shop is located on Washington Street. Being the most historical Chinatown in North America, the district is not only where the local Chinese live and gather, it is also a major tourist attraction for visitors from all over the world. As Lukfook Jewellery is the only well-known Hong Kong jewellery brand in the district at the moment, the Group expects to further penetrate into the Chinese communities in the overseas market through the opening of new store.

Photos of the opening ceremony of the new shop on Washington Street: 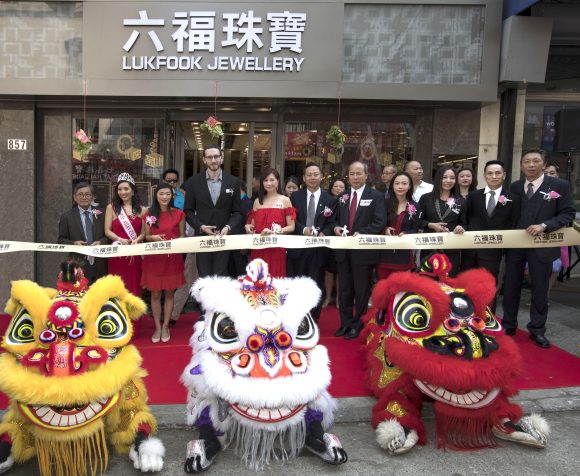