Mr. Wong Wai Sheung, Chief Executive of the Group, said, “The overall performance in the financial year 2008/09 was satisfactory. The Group’s total turnover maintained a growth in face of the slowing down of the economy. The economy of the PRC stayed strong in spite of the global financial crisis. Appreciation of Renminbi and the continued influx of the PRC tourists benefited the Group’s retail business.”

shops in the PRC, Hong Kong, Macau, Canada and the United States. The Hong Kong market remained the key market of the Group, with a turnover of HK$3,113,074,000, which is an increase of 6% compared to the previous year, taking up 80.7% of the Group’s total turnover. As at 31st March 2009, the Group operated a total of 30 retail outlets in Hong Kong. During the year under review, the Group opened two retail shops in Tseung Kwan O and Causeway Bay, Hong Kong and mostly finished reimaging all retail outlets in Hong Kong.

The Group’s business in the PRC market benefited greatly from the strong growth of the economy of the PRC as well as the Beijing Olympic Games. During the year under review, turnover from the PRC market accounted for 11.7% of the Group’s total turnover, amounting to HK$449,472,000, representing a 71%

For the Macau market, the Group held an optimistic view in the retail industry of Macau. During the year under review, the Group opened its fourth retail outlet in Macau in December 2008. Turnover from the Macau shops amounted to HK$: HK$151,415,000), representing a 77% increase as compared to the previous year.

The Group will continue to work according to the corporate motto of “Brand of Hong Kong, Sparkling the World”, to continue to expand its retail network in Hong Kong, Macau and the PRC markets, and to look for suitable opportunities to broaden its network internationally.

The Group’s business continued to expand in spite of the financial turbulence that shadows the market. The Group acquired the whole block of commercial building in Jordan district, Hong Kong in June 2009 with consideration of HK$  for business partners [Note 1]. In addition, the Group opened a retail outlet in Nathan Road, Tsim Sha Tsui, Hong Kong in June 2009, bringing the total number of retail outlets in Hong Kong to 31 at present. The Group will also open another retail outlet in Star House, Tsim Sha Tsui, in September 2009, in the hope of expanding its sales network in local tourist district.

“Looking ahead, the Group shall concentrate its effort on developing the PRC market. The new policy of “one issuance, multiple entries” for Shenzhen residents and the promotion of domestic consumption by the PRC government provided favourable factors to the Group’s business. In addition, economic growth was sustained in the PRC economy despite the financial crisis. The Group sees great potential in the development of the PRC market and is determined to further increase its market share in the PRC. In addition, with the Group’s Hong Kong business becoming mature and remaining steady, we believe that the PRC market shall be the key growth driver in the future. The Group will continue to promote the “Luk Fook” brand through various promotion opportunities and participate in governmental promotion campaigns. ” Mr. Wong concluded. 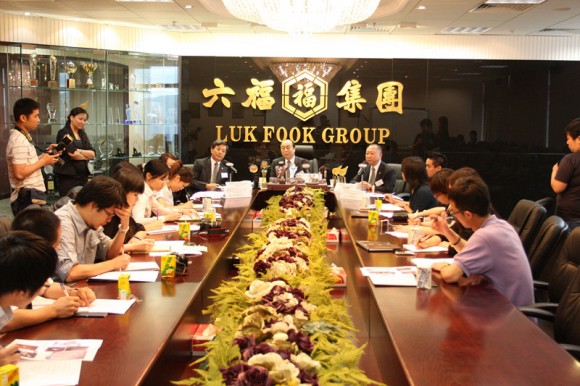 Mr Wong Wai Sheung, Chief Executive of the Group, announced the results of Group in 2009